Wednesday was too deadly. Together we took the campaign to ban fracking in the NT to the national stage.

And sent a powerful message to the NT Gunner government: protect water by banning fracking for good.

The message is getting through. We just got back home from Darwin and NT politicians up here are feeling the pressure from people like you who are passionate about land rights and our climate. One of the NT ministers said to us, “I want to be on the right side of history, I’ll be pushing for a ban.”

Water is life in the NT. It is the lifeblood of communities. That’s why we’re highlighting the impact of fracking on water. Our new documentary ‘Water is Life’ aims to take the energy of our day of action to communities across the country. Today we’re launching the doco and we need your help to spread the world.

Head to a screening near you or check this guide to host your own film night.

First up, here’s a few shots from around the country from the National Day of Action to Ban Fracking, inspiring stuff: 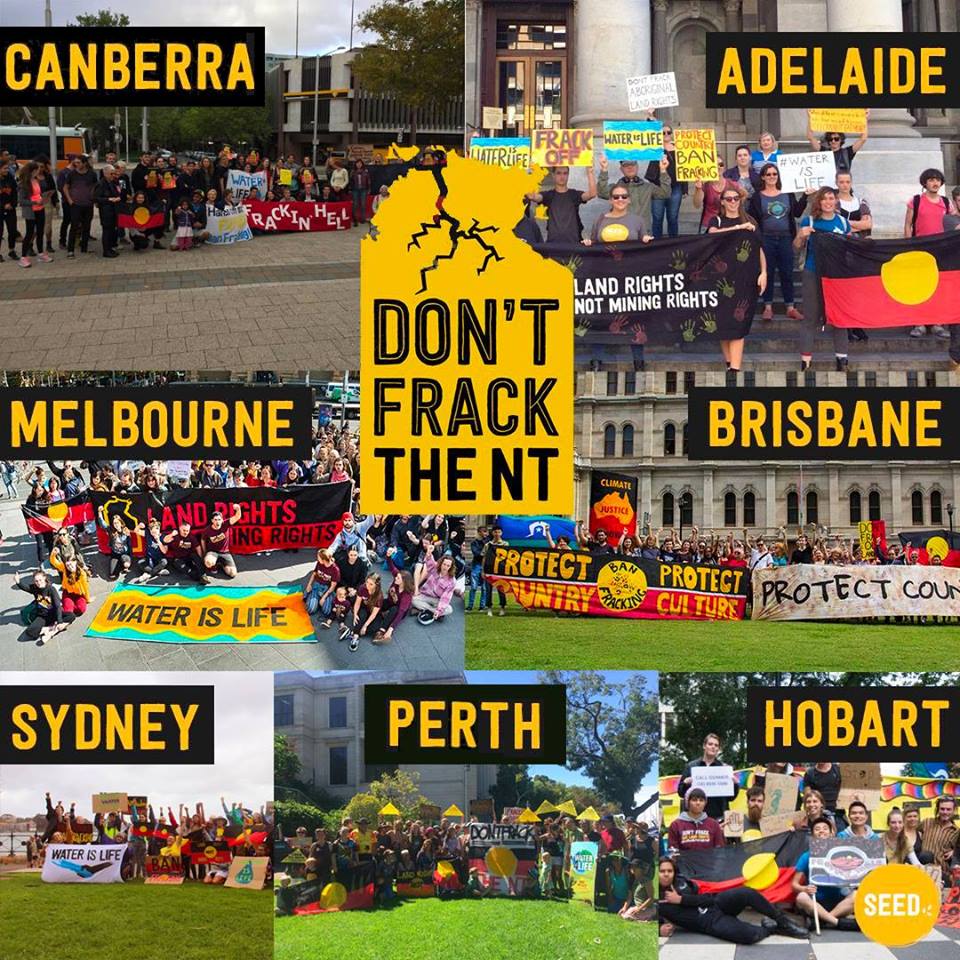 Seed volunteers supported by AYCC allies led these powerful actions across the country, where hundreds of people turned up in solidarity with Aboriginal communities threatened by fracking.

This comes at a pivotal time, where next week the Independent Enquiry into Fracking in the NT will hand down their final report.

We know that they haven’t conducted studies on the impact of fracking on groundwater, and we know that the gas lobby is breathing down the necks of NT politicians.

Together we can be louder and more powerful than these dirty gas companies, and show the Government that there is a powerful and uncompromising movement of people who won’t stop until Chief Minister Gunner bans fracking permanently and communities are protected for the long term.

‘Water is Life’ is our documentary about the Aboriginal communities fighting against fracking plans in the NT. They learn from First Nations brothers and sisters in the US who are suffering the effects of greedy oil and gas companies, and call on you to join their fight.

Already there are a bunch of screenings happening all across the country. Check them out here, and invite your mates along.

The politicians are starting to feel the heat, but we need to keep up the pressure. We need to raise awareness and show them the rest of the country is watching. This decision will be their legacy, ban or no ban.

Spread the word so we can get a permanent ban on fracking by attending a film screening with friends, or hosting your own.

Thanks for your support and solidarity,
Millie and Nicole

P.S. To make sure as many people as possible are fired up to stop fracking, we need to host a lot of community screenings.
You can host your own using this guide here.